This year’s Thomas Smith Charity Swim will not be seeing one of its eldest swimmers, Alfred Abela, performing his mid-air somersault before diving into the sea – a stunt that has become synonymous with the Christmas season and the annual fundraising event.

Alfred, who was 80 years old, passed away last month after a short illness.

“This time he was as keen as ever to take part in the swim, something he looked forward to every single year,” said his heartbroken son Steve, who will be attempting the somersault as a sign of respect for his father.

“Every year, I would be there on the day, together with the rest of the family, wearing warm clothes and watching my father enjoy being one of the first to enter the sea with his famous somersault. This year, the swim means so much more, since, strangely, my father’s illness and death brought me closer to him.”

Alfred loved the whole event by the sea – raising money, meeting friends, the President and other special guests, doing his traditional somersault, posing for pictures and seeing his family watching.

“Although my father wasn’t a drinker, he always drank a tot of whisky to warm up after the swim,” said Steve who, together with his two other brothers and two sisters, was born in Australia. 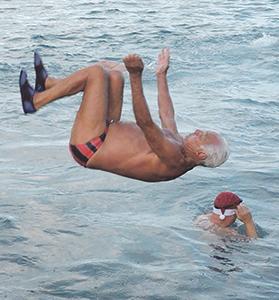 Alfred Abela performing his famous somersault during a past edition of the charity swim.

“We grew up in Australia, until my father started bringing us to Malta, and my mother took us back from time to time. After about four attempts of coming and going, we ended up living here. My father loved Malta, so about 30 years ago, my parents bought a flat on Tower Road and the Mediterranean became my father’s front garden. He surely made the most of it.

“My father had been swimming every day for years now – summer and winter. He was known by a lot of people. Tourists who visited the beach where he swam would come back to the same area to look for him.”

Alfred was a professional footballer with Marsa FC, until he emigrated to Australia to play football for George Cross. His nickname was Ir-Rixa, but he was also known as Tal-Li Steak, after his father.

The swim will bring me that little bit closer to my father. I held, helped, talked, kissed and got to know my father more in the last six months of his life than in the lifetime we had together

“My parents met in Australia. My mother lived there since she was three years old. This is why she loved Australia. It was her home, as all her family lived there. My father loved Malta – the sun, the sea, horse racing and football. I think he was the first bookmaker in Malta way back in the 1970s.

“In fact, bookmaking at the Marsa racetrack was one of the main reasons why we kept coming back to Malta.” 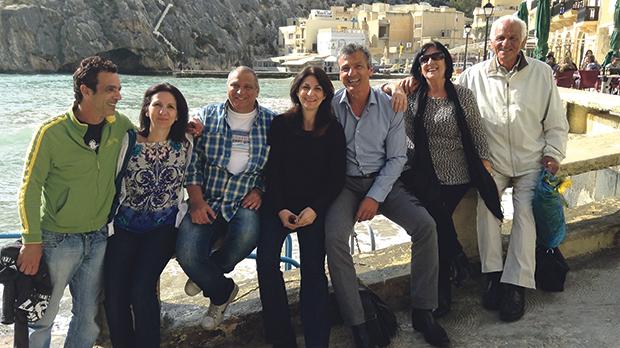 The Abela family (from left): Jason, Melissa, Darren, Suzanne and Steve with their parents, Frances and Alfred.

Alfred was an active man. All year round he would be by the sea in the morning, go up for lunch and make his way down to the beach.

“If the sea was too rough at Surfside, he would swim at Sliema Pitch where it would be calmer,” Steve said.

Alfred’s beach mates said that whenever someone came down to swim, they would ask him if he wanted to swim with them. He would always accept, even if he would have just gotten out of the water. 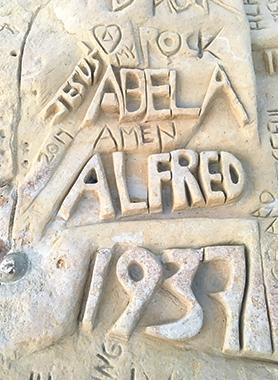 Etching on the rocks in Sliema: gone but never forgotten.

“When my father fell ill, we did our best to take him down to the sea for as long as possible. He was much more at ease in the sea than on land. I had to help him walk on land, but once in the water he never wanted to get out. Sometimes, I would leave him in the water and watch by the shore. I got nicknamed ‘the chicken’ by my sister Sue because the sea was too cold for me and I would not jump in unless I had to. The sea will always remind me and my family of our father. In fact, we wanted to bury him at sea, but my mother didn’t want to.”

Thinking of the big day ahead, Steve prays not to end up on his back before diving in.

“Although my father taught us all how to swim by just throwing us in the pool, he never taught me how to perform a somersault,” he joked.

“I’m looking forward to the swim, as it will bring me that little bit closer to my father. I held, helped, talked, kissed and got to know my father more in the last six months of his life than in the lifetime we had together.

“In these last moments I wanted to speak with him and get to know him more; but the illness affected his speech, so we couldn’t talk. How ironic!

“I left it too late. If there’s anyone out there who needs to mend a family relationship, don’t leave it till the end.” 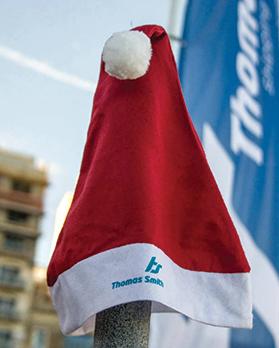 The charity swim, which started off in 1999 as a bet between friends, has so far raised over €102,000. Organised by the Thomas Smith Group, it has become a fixture on our local calendar of events.

The company always tops up the sum of money collected from the charity swim.

The event generates a growing interest and an increasing number of swimmers, who all express their solidarity and altruism by jumping into the cold sea for a good cause.

The money collected from the swim is donated to the Malta Community Chest Fund.

As part of its corporate social responsibility programme, the Thomas Smith Group supports a number of NGOs, such as the Multiple Sclerosis Society, Richmond Foundation, Puttinu Cares, Hospice Movement and Noah’s Ark Sanctuary.

The group has also contributed to the restoration works at Our Lady of Victories church in Valletta, a project coordinated by Din l-Art Ħelwa.

The 19th edition of the Thomas Smith Charity Swim – off the pier by Independence Garden in Sliema – will be held on Sunday, December 17. Those who cannot attend may still donate by calling Thomas Smith on 2205 8058 or e-mailing charityswim@tcsmith.com.